Flocculant reduction for the gravel washing

Text of the case study (translation from Russian):

Despite the seeming simplicity, a line for washing crushed stone and gravel is assembled from different mining equipment. For washing used recycled water. But water is not enough. To wash away the pollution, the source gravel added crushed stones sand and. The whole mixture goes into the drum thunder (trommel), than to the log washer and to the spiral classifier. As a result the impurities separate from the gravel. The stones are sorted out and dirt with sand are removed with the water. 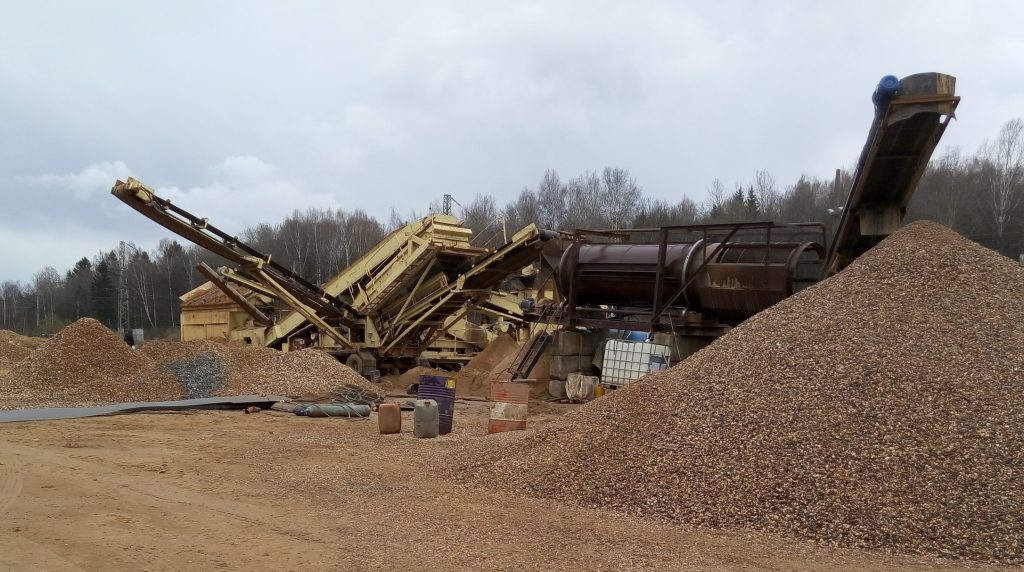 Fragment of a line for the washing of crushed stone and gravel (Moscow region).

For reuse, the water should be clean. The cheapest method of cleaning is sedimentation. For this water is going to the settling tanks. It may be a few small ponds (as at this facility) or group of pools (tanks). Over time dirt, sand, dirt and clay settle down to the bottom of the ponds.

To accelerate the process of precipitation is used chemical reagent – flocculant. Flocculants is a group of chemicals – polymers, polyelectrolytes, which have on the surface electrically charged free radicals. Due to the electric interaction, they are fixed to particles of dirt, and weld them together, forming friable flocculent aggregates (flocks).

The use of flocculant allows to rapid (in 7-10 times) reduce the time of precipitation of suspended particles – clay, sand, limestone in the circulating water. And, thus, to reduce the number and size of clarifying ponds (basins).

The disadvantage of this method is the high cost of the flocculant and the need for installation of additional equipment:

Also, like most chemicals, flocculant is purchased in barrels. Flocculant should be stored in a heated warehouse. And, as necessary, somebody should add it to the tank.

All this is a routine additional burden for the staff.

The use of WS water conditioner for this site allows to reduce the flocculant consumption by 30%. The device will pays for itself in 1 season, and it is only because of reducing the consumption of flocculant.

Water after treatment by the WS water conditioner for 3 seconds, after 1, 2, 3, and 5 min after treatment. Before treatment the water was intensively mixed. Treatment occurred immediately after mixing, until the water in the beaker was still rotating.

It is seen that precipitation of suspended particles occurs in 3-4 times faster than in water without treatment.

The peculiarity of the technology is that the size of the flocks is extremely small (may be about 1 micron). They are virtually invisible to the naked eye.

We can also see that in the water, at the initial stage, no characteristic “veins, there is no such deposition precipitation and the transparency, which gives the flocculant.

For the process water, after the water will pass through the water conditioner several times, the flocks gradually will become bigger. They will become more severe and will eventually precipitate to the bottom or will be retained by the filtration system. At this moment the flock can be visible. They are looking as points, put with a sharpened pencil.

Obviously, at this facility, the water conditioner cannot fully replace the flocculant. Here we can speak only on about reducing of the flocculant consumption. Average is 30-60%, depending of the conditions of a specific facility.

However, it should be noted that flocculation with the use of the WS water conditioner have certain advantages:

The principle of flocculation with WS water conditioner of (in brief).

Water conditioner temporarily electrically charges suspended particles of dirt flowing through the unit. Some of them got positive charge, others negative charge. Mutual electric attraction of charged particles in the water triggers flocculation process. And mixing of the water increases their chances to meet each other, i.e. create more flocks.

Joined together, particles form bridging ties, linking individual particles into large agglomerates. Forms stable suspended particles – flocks. Flocks in the future will precipitate or will be catch by filters.